Numerous scholars have addressed the ways media, technology, and capitalism have affected Western notions of love over the last few centuries. Little attention, however, has been paid to the impact of these forces on the conception of love in Africa, or even to the subject itself. The Progress of Love explores romantic love, self-love, friendship, familial affect, love of one’s country, and other bonds in and around the continent. Though the exhibition is weighted towards art produced specifically about love in Africa, works that might otherwise be considered more “Western” in orientation are included as well, calling attention to the global exchange through which such concepts develop, and to both the shared and distinct aspects of the experience of love. 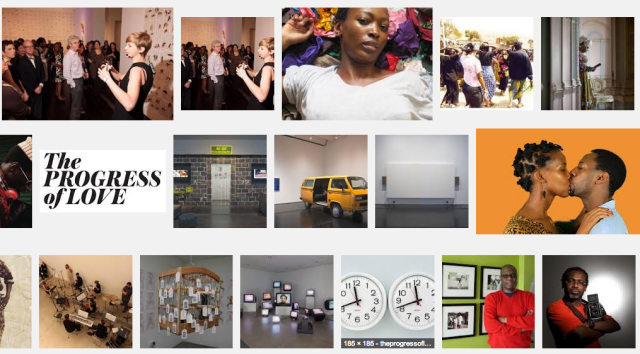 Billie Zangewa attended Rhodes University in Grahamstown, South Africa, receiving a BFA in graphics and printmaking in 1995. After graduation, Zangewa moved to Johannesburg, where she continues to reside. She worked in the fashion and advertising industries before devoting her time wholly to art. Drawing upon her understanding of textiles and fashion design, the artist combines text, luscious fabrics, and embroidery techniques to create tapestries that portray vibrant urban landscapes, autobiographical scenes, and portraits. The resulting works refer to both her own experiences and those of women more broadly.

Zangewa was awarded a three-month AIR Antwerpen residency through Res Artis for her work in Dak’Art, Dakar (2006), and was the winner of the Absa L’Atelier Gerard Sekoto Award, South Africa (2004). She also recently completed a residency at the Bronx Museum of the Arts, NY (2009). Her solo exhibitions include Black Line and Stitch by Stitch, Afronova Gallery, Johannesburg (2010, 2008); Hot in the City, Gerard Sekoto Gallery, Johannesburg (2005); and With a Series of Gestures, Alliance Française, Gaborone, Botswana (1997). Her work has been shown in group exhibitions in Africa, Belgium, France, Spain, and the United States, such as En toute innocence: subtilités du corps, Galerie Imane Farès, Paris (2011); Kaddou Diggen, Galerie Le Manège, Dakar (2011); and Vibrant Exposure: Colorful Expression, Amaridian, New York (2008).

Despite an overall reluctance among contemporary artists to deal with issues of the heart, more than a few tell great stories of romance and heartbreak.

Late last year, “The Progress of Love” exhibition opened at three institutions simultaneously: the Menil Collection in Houston, the Pulitzer Foundation for the Arts in Saint Louis, and the Centre for Contemporary Art, Lagos. The show pairs several American and European artists with many more from Africa, giving a cross-cultural perspective on the topic of courtship.

Another show, “This Will Have Been: Art, Love & Politics in the 1980s,” debuted at the Museum of Contemporary Art Chicago in February 2012, placing contemporary takes on love and desire into historical context. (This show is currently at the ICA Boston until March 3.) While none of the artists in these exhibitions will soon be hired by Hallmark to churn out Valentine’s Day cards, they all offer sophisticated approaches to what is undeniably a complex and rich subject.

HOLLANDAISE is a critical, contemporary art exhibition built around this typical textile. The idea for the exhibition is from curator Koyo Kouoh, who is director of her own art institution in Dakar, Senegal. She asked five artists to delve into the phenomenon of Hollandaise and the peculiar trading relations and cultural interchanges that it represents. They all produced new work especially for this exhibition, which after Amsterdam will travel on to Dakar. 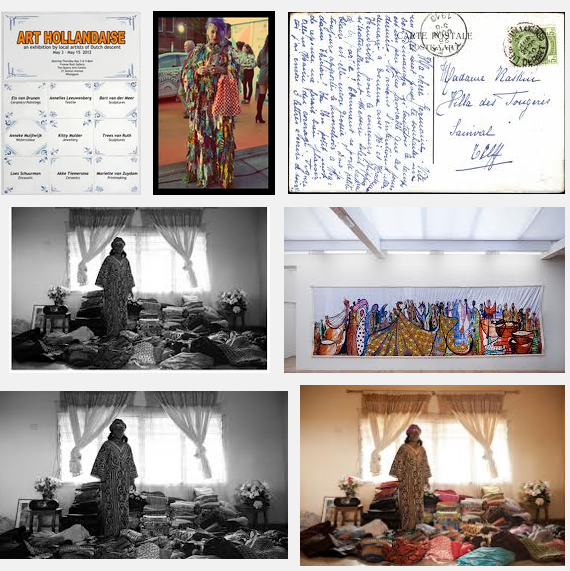 Growing up in Africa, Kouoh became fascinated by Hollandaise. The exuberantly decorated textiles are used chiefly for clothing for special occasions, such as weddings and funerals. Some patterns are therefore emotionally identified with specific events in one’s own story. But despite the success of Hollandaise on the African market and its strong identification as African, Africans themselves are hardly involved in the creative process for ‘their’ fabric at all. Furthermore, today the Dutch market leader is encountering heavy competition from the Far East. Yesterday’s imitator is being imitated in turn.

The exhibition HOLLANDAISE is a creative and also critical examination of such historical, global developments and their local implications.

Billie Zangewa, living in Johannesburg, incorporates photography into textile works. For HOLLANDAISE she focused on classicVlisco patterns that in Africa are popularly known by exotic (women’s) names such as Aura and Angelina.

Godfried Donkor, based in London, made a two-channel video film about his mother and her friends in Ghana, who since the 1950s have built up collections of deeply cherished textiles. These collections, regarded as an investment, also reveal their life histories.

Abdoulaye Konaté, who lives and works in Mali, incorporated Dutch Wax into a monumental textile-based representation of festive ceremonies in his country. Both the material used and the celebration scene raise issues regarding the ethnologically coloured concept of ‘authenticity’.

Wendelien van Oldenborgh‘s La Javanaise was filmed in the Royal Institute for the Tropics in Amsterdam. The work addresses the inextricable link between colonialism and globalization, authenticity and imagination, performing and posing, especially in relation to the Wax Hollandais and its origins.

Willem de Rooij developed a specific, industrially manufactured wax print that subtly refers to the currents of migration and trade among Africa, Europe and Indonesia.